The fantastic Raspberry Pi board has evolved again! Model 4B is now the latest offering, and it packs several upgrades that are significant enough to position the Pi 4 as a desktop replacement. Here are all the details about the new boards (there are three versions!), the new features, and what related components you might need because of the changes. 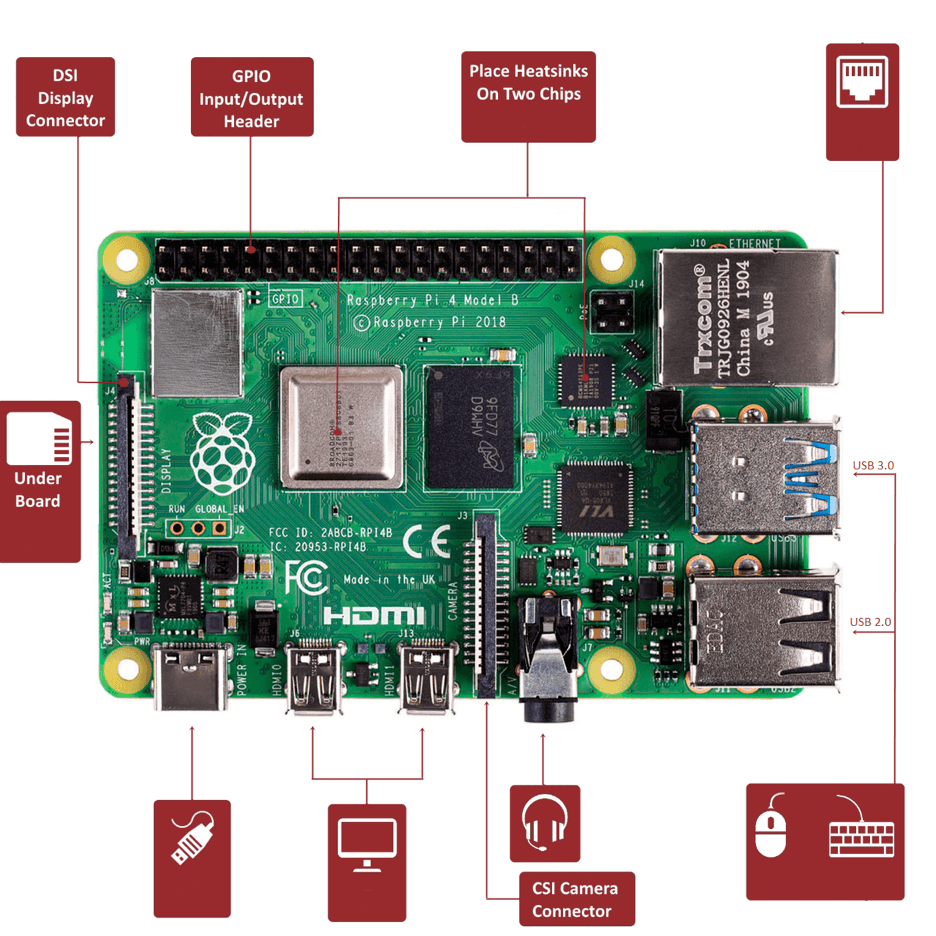 Check out this quick video that we put together for you:

The most surprising change for the Pi 4B is that it is available with three different amounts of fast DDR4 SDRAM memory; 1GB, 2GB, or 4GB. Combined with a newer 1.5GHz quad-core processor, the Pi 4B can run larger programs and tasks faster than ever before.

Communications have been updated to current standards; Bluetooth 5.0, USB 3.0 (two ports), and true Gigabit Ethernet for speedy communication via wireless and wired interfaces. The dual-band wireless LAN now comes with modular compliance certification, allowing the board to be designed into end products with reduced compliance testing, improving both cost and time to market.

Video output has changed significantly with the Pi 4B. Dual micro-HDMI ports allow the following display configurations:
•    One display at 4Kp60 resolution
•    Two displays at 1080p60 resolution
•    “Possibly” two displays at 4Kp30 resolution
With 4K resolution and dual monitor support, the Pi 4B is a strong performer for many applications, such as desktop replacement, media center, and digital signage. The micro-HDMI will require the use of an adapter or adapting cable to connect to most displays.

An increase in the power input has been made, allowing 3.0A of current instead of 2.5A via a new USB-C connector. Power supplies for the Pi are now also available with native USB-C connectors, but previous 2.5A models can be used successfully with adapters.

With new board models, there are always a few items that become incompatible and need to be replaced. Here’s a list of items that you’ll need if you purchase a Pi 4B board. Note that these are included in many of our kits, and that you can save a bit of money by buying them in kit form.

The Pi 4B Board of Your Choice
Choose the version with the amount of memory for your needs. Is your Pi for a low-power monitoring application, or is it running multiple demanding tasks at once?

An Operating System
The new processor configuration requires an updated OS released after June 24, 2019. Raspbian is always the first to be available, and others will soon follow. Here are links to download different OS’s or to purchase them pre-loaded.

A Case
Because of port changes on two edges of the Pi 4B, previous Pi cases from any earlier board won’t be compatible. Here are several Pi 4 cases that are already available.

A Power Supply
As we mentioned earlier, previous micro-USB power supplies should work well with the Pi 4B, unless many peripherals are being used. You can also purchase the higher-current USB-C power supplies listed below.
Raspberry Pi Power Supplies